Posted on January 29, 2020 by thecomputerperson

I have recently had to move a VoIP system from a Draytek router and a BT VDSL (Infinity) line to a Vodafone UK data SIM and contract.

Nice bit of kit, easy to configure with a fairly nice web interface and an ethernet socket for connection into a larger wired local network.

Shortly after migration to the new 4G (no 5G coverage yet!) internet via the Vodafone SIM – The first problem that cropped up: When you were in a call and pressed a button on your SIP based handset – the call would drop! This made IVR / Voice menu selection difficult. “Press 1 to speak to Sales” (press it..) <call drops>.

This was solved by simply turning the “SIP ALG” (Application Layer Gateway) off on the router. 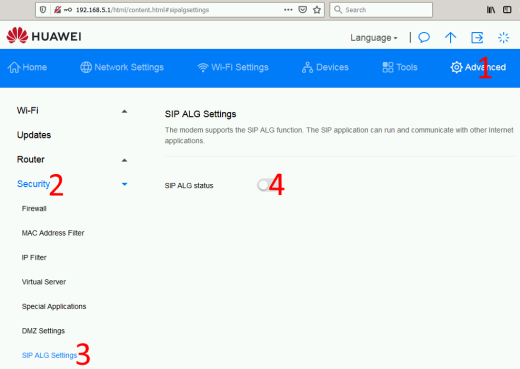 Find the setting under “Advanced” –> “Security” –> “SIP ALG Settings” –> and change the status of “SIP ALG status” to off.

The second problem took longer to become evident.
Randomly calls would not flow into the business. Outbound calls were fine but inbound would just sit at the SIP provider and eventually time out or hit voicemail with a 183 status code.

I’ve seen something like this in the past where an ISP had load balanced WAN IPs. In the previous instance it was solved by giving the phone system it’s own public IP.

On Vodafone UK this isn’t possible! Unlike the UK network Three.. Vodafone don’t give customers a public IP. (This also means you can’t do things like port forwarding). Vodafone use Carrier Grade NAT (CGN) and this could be causing problems. It is also possible that the NAT timeout on the Huawei router itself could be the cause.

Most likely the idle time on the SIP registration causes the NAT session to end so uninvited data from the SIP provider gets thrown away and never reaches the phone system.

This seems to have been reliably solved by adding a keepalive of 20 seconds on the SIP trunk / SIP settings. If you use Asterisk with PJSIP you can view instructions on how to do it here. If you use a VoIP phone and have similar problems you should look for the Keep Alive.