Congestion between BT and RapidSwitch.

Posted on January 11, 2014 by thecomputerperson

Update – 23rd Jan 2014:
The problem has not been around for the last few evenings. Someone with a route into tech staff at RapidSwitch claims that BT re-routed their traffic.

Update – 15th Jan 2014 (2):
RapidSwitch were much more responsive to a ticket but responded with…
“I’m sorry to hear that you’re still having issues. We buy upstream services from
various providers (Telia, Tinet, Global Crossing, Telecom Italia etc) and we
peer at LINX as well.

I’m afraid that as we do not buy any services from
BT directly, we cannot contact them about this. We are talking to Telecom Italia
about this, however, it will take some time until they contact BT and resolve
this. Unfortunately this is not something we can control and we do not have any
way to influence BT’s routing policy. We have tried in the past to talk to them
and they are not very responsive unfortunately.

I hope this explains
what the issue is. We are doing something about this, but seeing as it is not
within our control, we cannot commit to a specific timeline for when this will
be fixed.”

Update – 15th Jan 2014:
I’m upset with the quality of response from the twitter team :( Not sure where to go next. Back to RapidSwitch to prove to them that I can’t take the route that they suggest.
“I’m sorry for the problems you’re having at the moment. If you reset your BT Home Hub you will be assigned a new Dynamic IP address automatically. This may alter your routing for your ping to rapidswitch.

Unfortunately, there is no further information I can provide in relation to this issue. “

Original post:
Back in October 2013 I noticed that there was congested on Sunday evenings between BT Broadband and the hosting provider RapidSwitch (now owned by IOMart).

This resulted in an increase in ping to servers at RapidSwitch during Sunday afternoons and evenings. It also slightly reduced the transfer speed to those servers.
RapidSwitch host a lot of people who run media streaming, games and voice communications (Mumble, Ventrillo etc.).

I raised a ticket with RapidSwitch who noted:
“All issues seem to be on the BT Internet end. I would recommend that you get in touch with them to see if they can shed any light on the issue.”

As BT are pretty inept at dealing with most stuff (for example it took over two weeks for them to just replace the power supply on my VDSL modem that had failed!) I didn’t try and get in touch with BT at the time.

Then more recently I’ve found that this congestion has been happening during weekday evenings too.

I raised a ticket with RapidSwitch again just to be sure it wasn’t an issue their side and was told:
“We have escalated this to our network department and we have been informed that the issue is on the BT side of the network. The[y] advised that you contact BT in order to try and resolve the situation.”

This problem isn’t unique to my own monitoring. RIPE’s Atlas monitoring systems also show the same ping rises when you report against probes on BTs AS network. 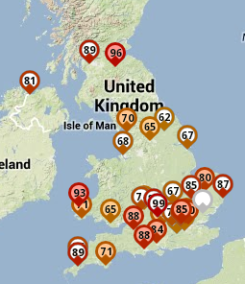 So now commences the BT support fun. I’m going to start with the Twitter team as I’ve had slightly better results with them in the past than the traditional live chat or call up route.