DealPly Live fakes itself as a Google Software Update service!

Posted on November 27, 2013 by thecomputerperson

While cleaning a customers computer I found the following. 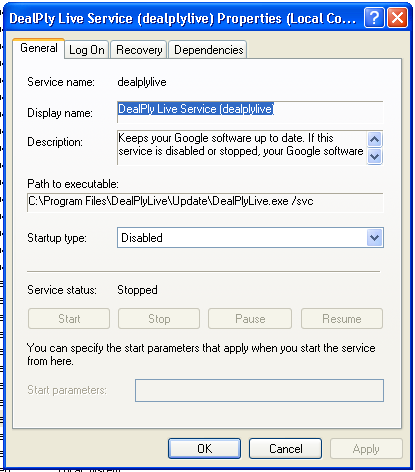 Awful that companies / junkware can get away with this. It has added a dealplylive service that is claiming, in its description, to be Google software update service. (In this screen shot I’ve disabled and stopped the service but it was set to auto start and was running).

Edit: I’ve found another customer infected with BonanzaDeals.. with folders containing similar structures to the DealPly and DealPlyLive folders.. (in this case BonanzaDeals and BonanzaDealsLive).
They seem to have changed tactic and now use Scheduled Tasks to load their program rather than services.. The computer in question also didn’t have the program in the uninstall list. The only way to uninstall was to kill the process BonanzaDealsLive.exe using task manager and then delete the Bonanza* folders from the Program Files directory.

Once again they fake the filenames to look like Google Updater (in this case npGoogleUpdate3.dll).